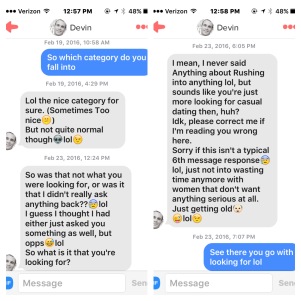 I am really bad at remembering to message these guys back on Tinder.  I slightly suck at it.  I get called out for it too.  Whoops.  However, in my defense, some of these guys message me late at night during the week.  I have to let them know I am asleep by or before 10 o’clock during the week.  Late nights during the week are once in a blue moon now.  I am not old either.  I am seasoned.  I also know if I do not get enough sleep it better be for a good reason because I will be tired and cranky as all hell the following two days.  Ha.

This Devin guy uses emojis like it’s his job and he is getting paid for it.  I question if he is another gay straight man.  What happened to small talk?  This guy is taking it right to the altar.  I decided he was too cereal for me.  ::unmatched::

When did men become more desperate than women with an internal clock ticking away?  The majority of people  really do not like slapping a label on things right out the gate.  Where is the fun in that?  Most of us avoid that topic as long as we possibly can.  I cannot 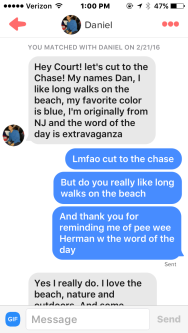 take some of these guys seriously though.  This Daniel guy very well could have been joking.  However, he did say he really did like long walks on the beach.  What happened to the manly men?  Did gay straight men take over?  It is nice to walk on the beach with someone special to you, but I don’t want to hear how you love that and candle lit baths.  I would rather you not say anything to me, grab me up like a cavemen, throw me over your shoulder, throw me on the bed, and show me who is boss.  I do not want to sit around and talk about feelings with you or where our future is going.  If I wanted to do that, I would call one of my girlfriends or my gay best friends to come over for wine.

One thought on “Tinder: Update 1”